CBD for Trauma and PTSD 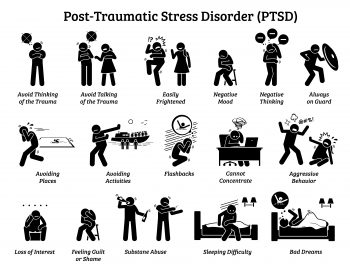 “Post-traumatic stress disorder (PTSD) is a disorder that develops in some people who have experienced a shocking scary, or dangerous event,” says the National Institute of Mental Health. Humans naturally feel alarm, trepidation, and terror after a particularly frightening event, they say. PTSD is a condition in which these experiences are prolonged and disruptive to the sufferer’s life. So, let’s discuss taking CBD for trauma and PTSD, and how it impacts the condition.

When does trauma become PTSD?

Stress and anxiety are generally normal parts of life, especially during traumatic events. Afterwards, some people develop symptoms that need medical and psychological treatment. This is post-traumatic stress disorder (PTSD).

The American Psychiatric Association began to include it in the Diagnostic and Statistical Manual of Mental Disorders (DSM) in 1980. Although this was a controversial move back then, time proved the need for the classification in a professional capacity.

“From an historical perspective the significant change ushered in by the PTSD concept was the stipulation that the etiological agent was outside the individual (i.e., a traumatic event) rather than an inherent individual weakness (i.e., a traumatic neurosis),” says the U.S. Department of Veteran’s Affairs. “The key to understanding the scientific basis and clinical expression of PTSD is the concept of “trauma.”

Traumatic experiences prompt responses from the body, such as trembling, racing heart, fear, and perspiration. These symptoms commonly last for a few days after the event. They’re the result of a cerebral defense mechanism that protects the body from harm. It’s generally known as the fight-or-flight response. These responses are a sign that the defensive system is functioning properly.

PTSD, on the other hand, isn’t a normal response to trauma. The Anxiety and Depression Association of America explains, “A traumatic event is time-based, while PTSD is a longer-term condition where one continues to have flashbacks and re-experienc[e] the traumatic event.” The good news is, PTSD is a treatable condition, overall.

PTSD is a serious mental health disorder with agonizing symptoms that a patient usually experiences daily. Many of these symptoms can vary, depending on the person and the traumatic event.

The American Psychiatric Association organizes the symptoms into four categories:

Intrusive thoughts are cerebral reminders of the sights and sounds of a traumatic event. They stir up disturbing and uncomfortable emotions. However, patients tend to have these obsessive thoughts often. Examples of intrusive thoughts include more than repeated memories playing in one’s mind. They can also include nightmares and flashbacks.

The scope of things that remind people of a traumatic event is extremely broad. Moreover, it varies from person to person. Avoiding physical reminders, such as the place of the event, the people involved, or activities that occurred immediately before the event took place are common avoidance practices. In addition, patients may go to extremes to avoid discussing or thinking about the event. Many patients also turn to drugs and alcohol to numb their feelings, which only worsens the condition.

Self-esteem and self-confidence often suffer in people with PTSD. Outside criticisms are louder than outside complements. Previous mistakes often seem worse than they once did. Positive self-views begin to dwindle. Feelings of terror, anger or shame distort the sufferer’s belief system. Consequently, this often leads to disconnection in relationships and even isolation. Living with unexplained distrust or guilt after a traumatic experience is certainly a sign of PTSD.

Negative thoughts and feelings are internal symptoms of PTSD. The disorder is also marked by external symptoms. These are arousal and reactive symptoms. Suddenly snapping at loved ones and taking unnecessary risks may signal the presence of PTSD. Insomnia and difficulty with concentration are also examples of these external symptoms.

How common is PTSD?

FDA-Approved Medications for the Treatment of PTSD

Pharmaceutical medications are a rather small part of PTSD treatment. A complete treatment plan includes a combination of therapies. According to WebMD, these therapies can include cognitive processing therapy, prolonged exposure therapy, eye movement desensitization and reprocessing, and stress inoculation training.

Drugs.com lists 16 medications that doctors prescribe for the treatment of PTSD. The most popular medications are prazosin, Zoloft, and sertraline.

Sertraline is the active ingredient in Zoloft, so we’ll address them together. They’re anti-depressants. Doctors generally prescribe them for depression, obsessive-compulsive disorder, anxiety disorders, PTSD, and premenstrual dysphoric disorder.

Effectiveness of CBD Treatment for PTSD: The Evidence

CBD is still in the infant stages of research. But overall results look promising. Take a look at some of the following examples of clinical studies.

“CBD might be an improvement over other available drugs used for treating the fear-related symptoms of phobias and PTSD, which can impair extinction (e.g., benzodiazepines) or have a less favorable side effect profile.”

“Administration of oral CBD in addition to routine psychiatric care was associated with PTSD symptom reduction in adults with PTSD. CBD also appeared to offer relief in a subset of patients who reported frequent nightmares as a symptom of their PTSD.”

“While further research into cannabinoid treatment effects on PTSD symptoms is required, the evaluated evidence indicates that substantial numbers of military veterans with PTSD use cannabis or derivative products to control PTSD symptoms, with some patients reporting benefits in terms of reduced anxiety and insomnia and improved coping ability.”

Using CBD for the Treatment of PTSD

Living with PTSD is unquestionably agonizing. People have been searching for better treatment options for years. Researchers can finally make meaningful progress with the passage of the 2018 Farm Bill.

If you’re using CBD for PTSD for the first time, there are a few things you should know. Firstly, CDB doesn’t get you high. In other words, you won’t notice any intoxication or changes in your mentality.

Second, the CBD dosage amount is highly dependent on weight, condition severity, metabolism, and how it’s taken. For example, CBD oil deposited under the tongue produces faster results than eating CBD-infused food. Start with a low dose of CBD and then slowly increase it until you experience the desired results. In other words, be patient.

Finally, carefully read labels and verify third-third party lab results for the product. This explicitly ensures that you’re ingesting the amount of CBD that’s printed on the label. Some companies are out to make a quick buck on the booming industry. Therefore, all CBD is not created equal. Trustworthy companies commonly use U.S.-grown hemp. Furthermore, they post lab results on their website.

We’ve developed an easy, user-friendly directory to help consumers find CBD oil and other products. Just submit your zip code and we’ll provide a listing of nearby locations for you to visit and ask further questions.

[9] Kissen, Debra, and Michelle Lozano. “How to Prevent Trauma from Becoming PTSD.” Anxiety and Depression Association of America, ADAA, adaa.org/learn-from-us/from-the-experts/blog-posts/consumer/how-prevent-trauma-becoming-ptsd.

[11] Parekh, Ranna. “What Is Posttraumatic Stress Disorder?” What Is PTSD?, Jan. 2017, www.psychiatry.org/patients-families/ptsd/what-is-ptsd.