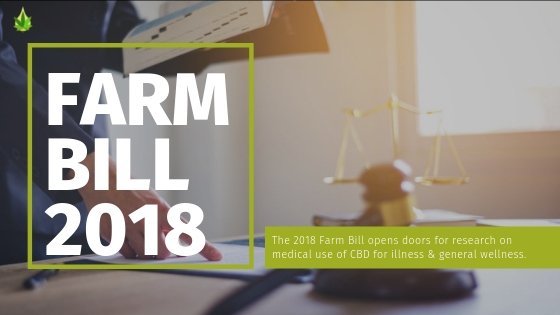 Not only does it make the use of CBD oil and infused products federally legal for consumers, but also further opens the door for continued research in its benefits for illnesses and general wellness.

How Does the Farm Bill of 2018 Affect CBD Research & Business?

The Farm Bill of 2018 legalizes the cultivation, distribution, and consumption of hemp, but not marijuana. Although these are two varieties of the same plant, Cannabis sativa L., they’ve recently been regarded in contrast with each other. Marijuana contains significant levels of delta-9-tetrahydrocannabinol (THC), which produces the psychoactive effects of the plant. For this reason, all varieties of the plant have resided on Schedule I as a controlled substance by the Drug Enforcement Agency (DEA) and has been regulated as such under the laws of the Controlled Substance Act.

Cannabidiol (CBD) oil is derived from hemp and has low levels of THC. The Farm Bill of 2018 allows consumers to take advantage of the many medical benefits that have been discovered in CBD with no federal legal consequences; however, state laws regarding hemp must continue to be adhered to.

Forbes quotes some additional key points of the game-changing law made by Senior Attorney Steve Schain at Hoban Law Group, the self-described “premier cannabusiness law firm” of the nation:

What Do These New Laws Mean for CBD Research?

While marijuana remains on the DEA’s Schedule I, CBD has been singled out for federal legalization. This will have a significant impact on growth in research opportunities.

The 2014 farm bill allowed researchers to stick a proverbial toe in the water of CBD research when it allowed institutions of higher education and agriculture departments of states in which hemp use was legal to grow it under a pilot program. But that’s not all; it also “established a definition of industrial hemp, officially setting the THC threshold in the U.S. at 0.3 percent on a dry weight basis,” according to the American Farm Bureau Association.

To safeguard the progress made in research done after the 2014 farm bill, the Brookings Institution points out that, “Section 7605 [of the Farm Bill of 2018] re-extends the protections for hemp research and the conditions under which such research can and should be conducted. Further, section 7501 of the Farm Bill extends hemp research by including hemp under the Critical Agricultural Materials Act. This provision recognizes the importance, diversity, and opportunity of the plant and the products that can be derived from it, but also recognizes an important point: there is still a lot to learn about hemp and its products from commercial and market perspectives.”

What Does it Mean for Medical Patients Who Need CBD Oil?

As research continues, consumers have already discovered several ways in which CBD is beneficial for the needs of their minds and bodies. Many patients have been able to reduce or eliminate the pharmaceutical treatments of anxiety, depression, chronic pain, arthritis, seizures and more. In fact, Forbes notes, “Forty-two percent of the CBD users said they had stopped using traditional medications like Tylenol pain relievers or prescription drugs like Vicodin and had switched to using cannabis instead. Eighty percent said that they found the products to be ‘very or extremely effective’.”

Harvard Medical School also cites studies with promising results while cautioning, “More study in humans is needed in this area to substantiate the claims of CBD proponents about pain control.” The Farm Bill of 2018 allows for the expansion of opportunities to do just that.

As CBD oil and other hemp products become more available, the industry will continue to reach out to its base of consumers with more education on its products. Many consumers are currently unaware of the difference between psychoactive marijuana products and CBD-derived hemp, which can make patients hesitate to take advantage of the medical benefits of CBD oil. The Farm Bill of 2018 is another step forward in its use to relieve ailments that are historically difficult to treat.

6 Things You Need to Know Before You Buy CBD Oil